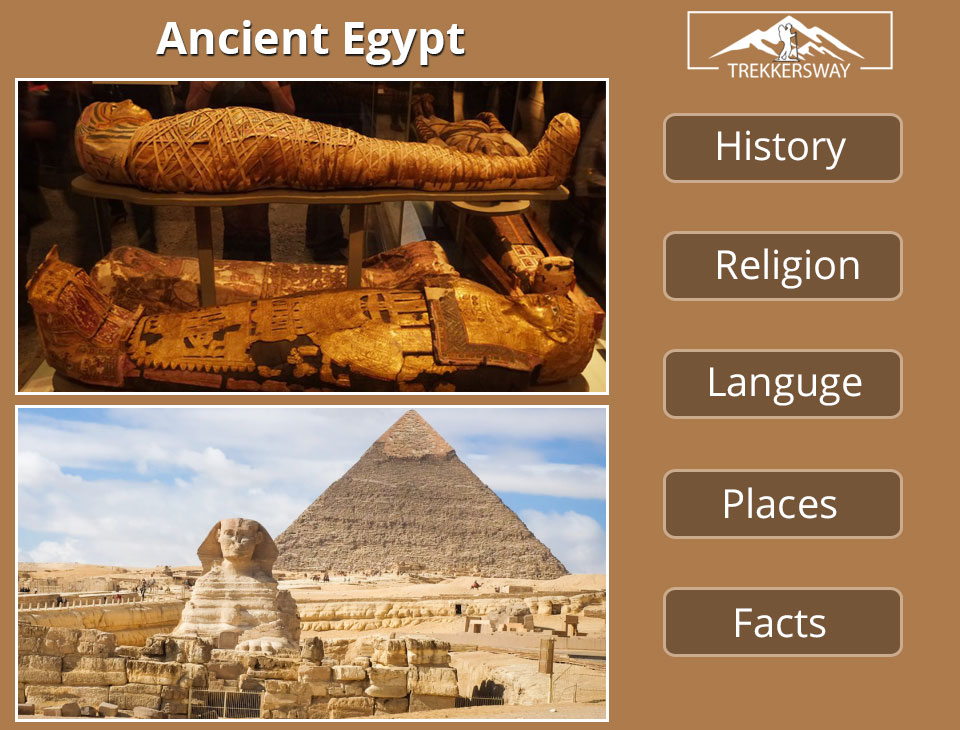 Ancient Egypt history was one of the greatest and most powerful civilizations of the world. The civilization of Egypt lasted for over 3000 years from 3150BC to 30 BC.

Facts about Pyramids of Giza

1. A century prior the Pyramids in Egypt were built.
2. Between 2560 and 2540 BCE the Great Pyramid was constructed.
3. The Pharoah Khufu was built for the great pyramid.
4. Tallest man made the structure in the world
5. Shrunk by about 25 feet.
6. In the construction of the pyramid, 2.3 million stone blocks were used.
7. There are three chambers in the interior
8. Pyramids built by skilled laborers.

Suggested Read:- Top 15 best cities in the world to visit

The Sphinx is a limestone statue of the recumbent sphinx located in Giza. It is one of the amazing landmarks of ancient Egypt, its example of sphinx art. It is world’s largest sculptures, 73 meters(240 feet) long and 20 meters (66 feet) high. The structure of this statue is body part like a lion and head like a human head with a royal headdress.

Facts about the sphinx

The Nile river comes in the longest river in the world. This river is formed by three principal streams first one is the Blue Nile and the second one is Atbara and the last one is White Nile. The name Nile is born from the Greek Neilos.

Facts about the Nile river

1. In Ancient Egypt, the Nile River provides fresh water, food, and transportation. And also provide the fertile land to farm.
2. This river is not just important for human beings. It also homes to lots of wonderful wildlife like fish, birds, and snakes etc.
3. In the time of August, the 2-week holiday celebrates for the ancient flooding of the Nile.These holiday called ‘Wafaa a Nil’.

Luxor also famous as the name of EI-Aksur, During the Dynasty of the New king kingdom.it was the capital of Ancient Egypt. This place is full of breathtaking beauty.

1. There are two outer courtyards in the Luxor temple.
2. The annual opet festival in ancient Egypt.
3. Luxor was situated in the center of Thebes.
4. It is also famous all over the world as the open air museum.

Temple of Horus built between 237 and  57 BC, it is one of the best monuments of ancient Egypt.This temple dedicated to Horus. There is a Hypostyle hall known as the Festival Hall. During the festival, this oldest part of the temple would be decorated. The sanctuary of this temple surrounded by many chapels and chambers.

1. The Chapel of Min
2. Temple forecourt
3. Entering the Inner Temple
4. Hypostyle hall
5. Sanctuary knows as the room of the Gods
6. The Birth house is known as The Mammisi

Must Read: LAS VEGAS CITY ATTRACTIONS IN THE WORLD

Mortuary Temple of Hatshepsut is one of the greatest ancient Egypt architectural achievements. This temple located on the west bank of the Nile, And it is the part of the Theban Necropolis. It is built in the half circle of cliffs. Temple of Hatshepsut marls the entrance to the Valley of the Kings.

1. It took the 15 years to build.
2. It is located in the valley.
3. It is a few hundred meters away from the tomb.
4. The temple also knowns as ‘Djesar-Djesera’ means Holy of holies.

Valley of the Kings

Facts about the valley of the kings

1. In the entire Valley of the Kings, the burial site of Tutankhamun is one of the famous parts of this valley.
2. There are numbers of the tombs of the Valley of the kings are not open to the tourist.
3. King Valley mark by’KV’ and Western Valley mark by’WV’.
4. The apex of the al-Quran offers you the iconic feature of the region.

1. Today we are using paper, pens, lock, and keys these all things invented by ancient Egypt.

2. The peoples of Ancient Egypt kept a cat as a pet. They believed that cat is good luck for them.they considered cat is the spirit animal.

3. The largest Egyptian pyramid is Pyramid of Khufu at Giza.The weight of this incredible structure as much as 16 Empire State buildings.

4. The peoples of Egypt believe in the afterlife. They give the importance for this incredibly moments. They believed that after dead body preserved by the process of mummification, The soul will lives forever afterlife.

5. Ancient Egyptians believed that the goddess plays different responsibilities. And the only needs of worshipped by which they can balance their life. And Egyptians peoples believed in more than 2,000 goddesses.

Above, in this article, We give you inform the facts about ancient Egypt. There are numbers of places where you can go for a visit. But before going you should have a need to know about the ancient Egypt by which you can make your trip more enjoyable and mysterious. And give you knowledge about the mummification in the above article.