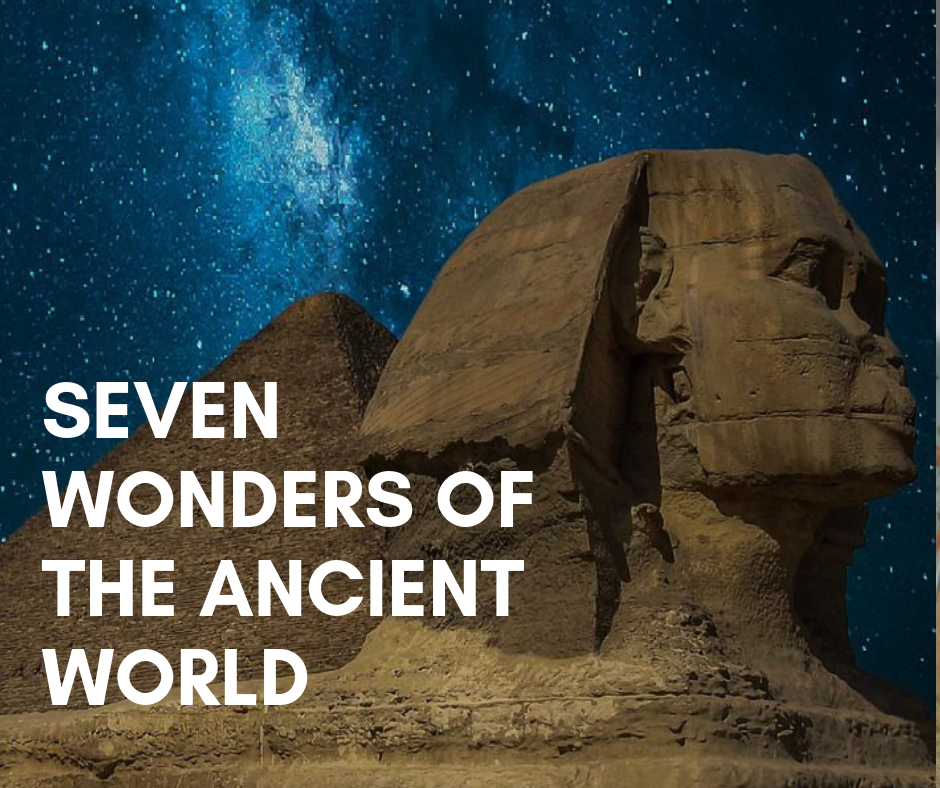 The seven wonders of the ancient world have a list of monuments built in ancient times, which differ from the third millennium BC to the third century BC. All the monuments quoted about their monuments, their grandeur, or the strong impression made by them during their contemplation are all extraordinary. This list comes from a document dating from 3rd century BC and was copied in the Middle Ages. The document that is based on today is a copy called Platinum 398. It is preserved in the Heidelberg University of Germany.

We hope in this article you get the knowledge about the seven wonders of the world, And if you want to visit in this superb places so firstly know about these places.

Seven Wonders of the Ancient World

The Seven Wonders of the Ancient world are:

Constructed between 2584 and 2561BCE, Great Pyramid was the tallest man-made structure in the world. It takes 20 years to build completely and has 3 burial chambers inside. That time the height of the pyramid of Giza was almost 147 meters tall. But today, due to the heavy erosion it’s height only 139 meters tall. Pyramid great wonders of the world have become for the next world.

This great place holds its name in the oldest seven wonders of the world.

The whole architecture was built with about 2.3 millions stone blocks.

Suggested Read: MOST FAMOUS CHURCHES IN THE WORLD | BIGGEST CHURCHES

This Garden of Semiramis famous as the name of Hanging Gardens of Babylon. Consist its name in the record of seven wonders of the ancient world. This was built by Nebuchadnezzar || around 600 B.C.E.

Some research gives the data about the architecture of hanging gardens, data show the there were rooftop gardens. And in Sir Leonard Woolley research. He suggests that the beautiful garden within the walls of the royal palace at Babylon.

This statue was one of the two masterpieces by the Greek sculptor  (the second statue of Athena in Parthenon) and was kept in the huge temple of Zeus in Olympia in western Greece. In a statue of about 12 meters (40 ft) high and with a statue of gold and ivory, representing Lord, God, elephant, gold and precious stones sitting on Goddess cedar ornamented with precious stones.

Must Read: THINGS TO DO IN USA | USA NIGHTLIFE

The famous temple of Artemis was count on the list of seven wonders of the world located near to Ephesus in Turkey.

Artemis temple dedicates to the goddess Artemis, and it is actually a Greek temple.

In 401 AD the temple finally destroyed but after it this temple three-time rebuild.

The Colossus of Rhodes was the long attraction of the world because there were beautiful beaches, and full of history.

Rhodes was a city full of schools, markets, stadiums, harbors and there are 3000 statues.

There was a statue, a huge bronze statue the height is 30 meters tall. The construction time is 12 year. But this statue today not there, it had destroyed by an earthquake in 226BC.

Today most people, only know the Colossus of Rhodes as the original seven wonders of the ancient world.

Important point: The statue built with an iron frame, and over this Rhodians used and sculptured brass plates.

The lighthouse of Alexandria destroyed in 1480 by several earthquakes.

It was built on the island of Pharos to help guide trade ships in their busy port in Alexandria, Egypt. The lighthouse was damaged by many earthquakes and eventually became an abandoned ruin.

The lighthouse of Alexandria was built on the island of Francis outside the seaport of Egypt’s Alexandria. During the reign of Ptolemy I and II, 300 – 280 BC With an altitude of more than 100 meters (330 feet), it was so impressive that it made space in the established list of original seven wonders of the ancient world.

Today, the southwest where the tomb is located, which is famous all over the city a tourist resort. Built on Apex of the hill.

Only base part remains visible of the Mausoleum of Halicarnassus which is one of the seven wonders of the ancient world.

In the above article, give you information about the seven wonders of the ancient world. Most people are surprised to know that not all Seven Wonders existed at the same time. Even if you lived in ancient times, you still need a time machine to see all seven. While the Great Pyramid of Egypt was built centuries before the rest and it is still around (this only “surprise” is still intact) most of the others survived only a few hundred years or less. Colossus of the Rhodes stood slightly more than half a century before the earthquake.

If you want to see one of them, so pack your bags and start this impossible tour through time and space. Do you have any ideas on seven wonders of the ancient world? Feel Free to share with us in the comments section.